So here we are, three weeks on from the phone call from the doctor where I was told that I was prediabetic.

It’s been a fairly productive three weeks, I’ve gotten control of both my calorie intake and my exercise levels.

The exercise bike that I purchased is generally used most days (today is a rest day on account of my calves telling me so) and I’m generally having less than 1800 calories a day, with the occasional pure Huel x 3 1200 calorie days to keep things interesting.

Obviously this rate of loss is not sustainable, and I fully expect it to level out, but for a start, it’s pretty good going and I’m happy with it. 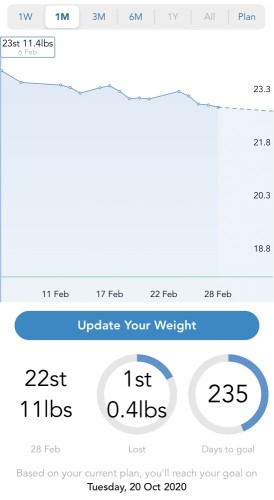 Starting weight was 23st 11.4lbs. My initial target is 18st, I don’t think I’ve been that ‘small’ since I was in my teens. So we’re certainly talking 20+ years. I’ve been as low as 19st 11lbs in recent years and that’s a weight that I can get on every single rollercoaster ride without even worrying about fitting - even Harry Potter and the Forbidden Journey.

Huel Black (mostly protein rather than carbs) is insanely good at satiating hunger, some days I could probably even go without a lunchtime one and skip the 400 calories but I’m keen not to have too big a deficit and cause any problems.

The new V3 (regular) Huel Vanilla and Banana are so much better than the v2 stuff was and the Huel Black tastes good too. I used to get some digestive/fibre related issues with the V2 stuff but I can quite happily have this for three meals a day and not suffer any ill effects.

I’m also concious that now I’m doing 30 minutes on the bike, my leg muscles have definitely become more defined, so going on the number on the scales alone isn’t going to be a good way to measure my success.

I’ve still managed to build in some treats, we had a pizza the other week, I went for the healthy(ish) option, had a full english at the cafe down the road and a cake later in the day so pretty much had a full weekend off, and went back on it Monday.

I’ve been here before, and I know just how easy it is to slip off the wagon, fall off and before you know it, you’re binge eating 3000 calories in front of the TV on a night. I’m determined that this will not happen again. Everything has to be allowed, in one form or another, with sacrifices and balance changes throughout so that I can still enjoy the occasional treat.

This week, snacks have pretty much been off the table. I’ve filled my evenings with things that occupy my hands (mainly gaming) and removed myself from the near vicinity of snacks to stop the cravings.

Meals have generally been a mixture of meat and veg with 3-4 different types of vegetable on the plate each night. I’ve not been feeling hungry at all.

I won’t be posting with progress on this all that often, maybe once a month. We’ll see.

I’ve got a few tech posts to write at some point in the next week or so. If I get around to it.

For now, have a great weekend, whatever you’re doing.