I’ve been using the 3D printer quite a bit this week. I’ve still not finished the Dinogenics stuff yet, just a couple more things to finish and then I’ll be able to rearrange all of the dino meeples into their own little containers. Fun eh?

The only problem is, the stepper drivers are EXTREMELY loud, whilst this doesn’t bother me too much if I’m listening to music on my noise cancelling headphones, it can cause problems on meetings, though the noise cancellation on Teams is pretty good, it sounds like it still gets through from time to time.

It’s payday today, which means I got hold of my spending money that I can blow on pretty much whatever I like.

Generally speaking, it’s board games, but there’s not that much I want to buy at the moment (I’ve not been looking), and I’ve got a couple of Kickstarters inbound in the next few weeks anyways.

Here’s a video of what I mean.

My friend Kevin and I have been on sort of a 3D printing adventure for quite a few months. We have the same machine and when I pulled the trigger on the board with same day delivery, Kevin did the same. Kevin updated the firmware on his original board a long time before me and has spent months and months calibrating, testing and figuring out how to get the best out of his printer.

The race was on. First to print, first to win! or something.

I took the opportunity to activate the arc welding settings on the printer firmware that I neglected last time and also enabled linear advance at Kevin’s recommendation.

Kevin got his board first, and started installation first.

Here’s the new board: 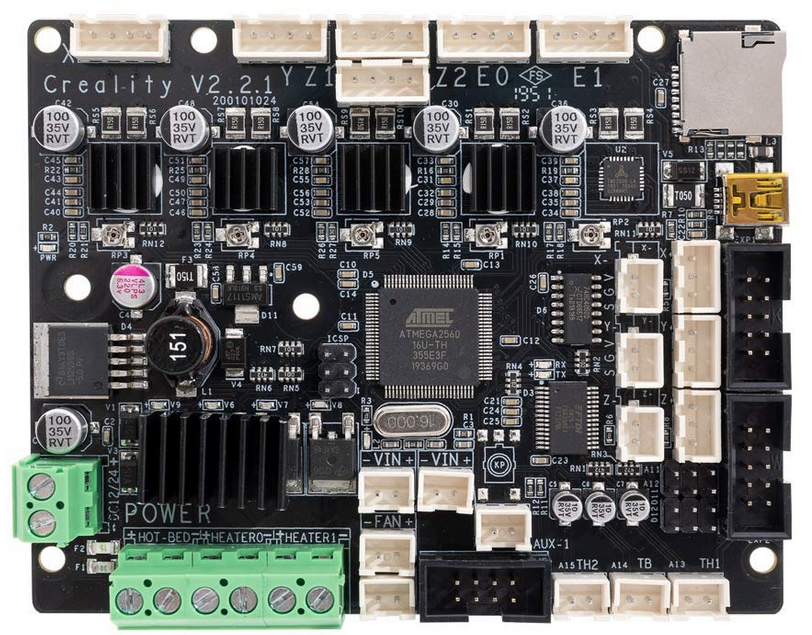 So the actual swap out was fairly easy, that is if you’ve done anything with circuit boards and connectors. No jumpers or anything to speak off, mainly connectors and a couple of wires that needed to be screwed into a block. 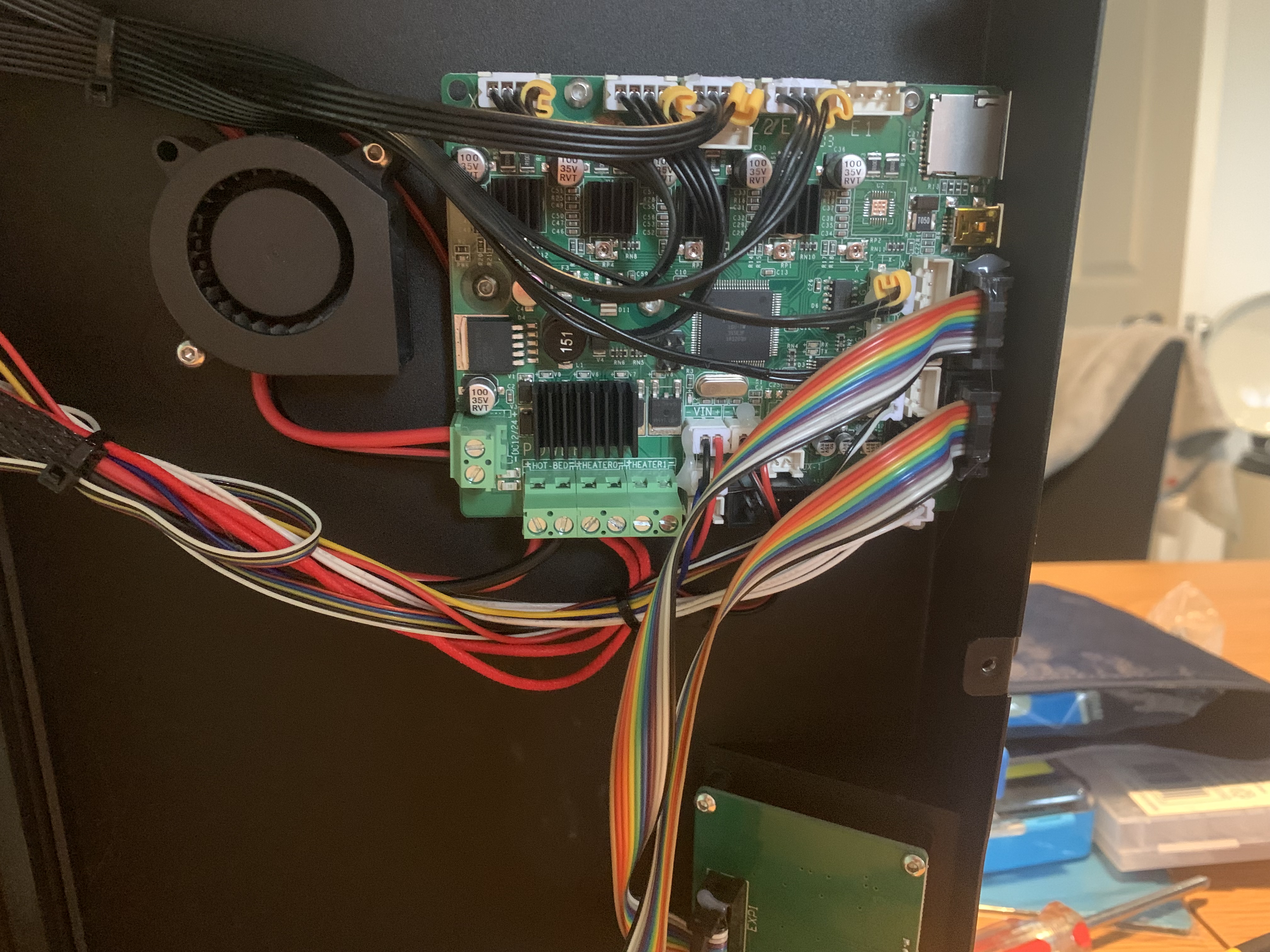 It was very reminiscent of any work I’ve been doing with the PiCades or X-Controller stuff. Most of it is fairly plug and play.

All the connectors and wires that were on the original board all seemed to have a place to go on the new board: 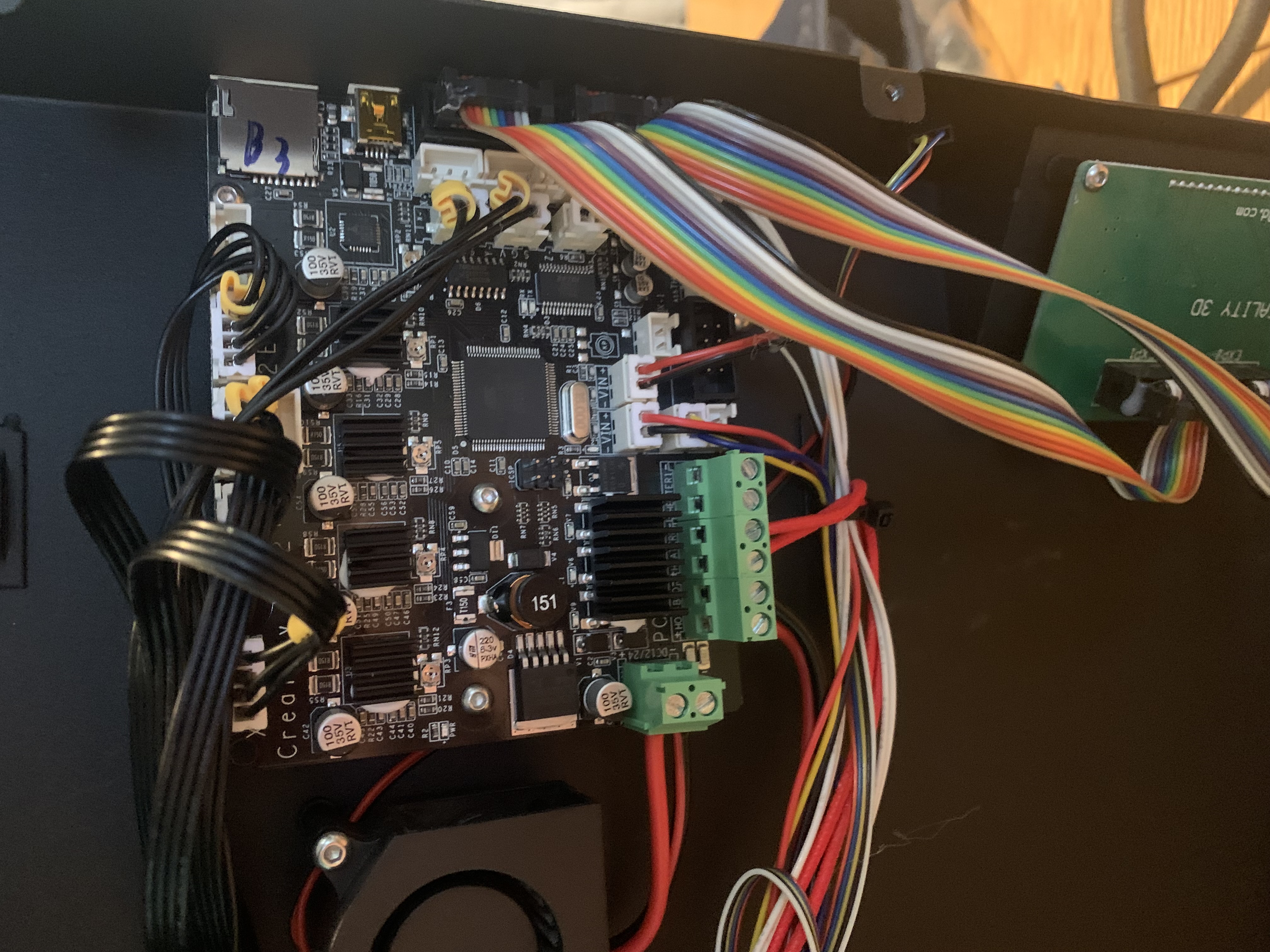 Being (overly) confident in my abilities (and tempting fate), I obviously screwed everything back together on the bottom of the case (8 screws, if I remember correctly),took it back upstairs and plugged it in.

I powered on the switch at the socket…..and nothing happened.

Then I remembered I’d turned it off at the machine switch. So turned that on and it sprung into life!

I got power to the screen, I was fully expecting it to be empty as the stock board firmware doesn’t carry a config file for the screen.

The BLTouch wasn’t lit up.

I took the screws out, had a look and realised that the cable for the BL Touch had hidden itself under the board. Plugged it into where it was meant to go and left the bottom off, just in case.

I plugged it into the PC, flashed it with the newly compiled firmware, all good. Did a power cycle and we were good to go.

Set it to auto home and it was near enough silent. This is INSANE.

Who would have thought that a motherboard could make such a big difference in the way that the motors are driven? It’s absolutely insane.

I did some temperature stuff to optimise the settings for the temperature of the hot end, the graph in Octoprint looked very fun (see the 10 peak things here). 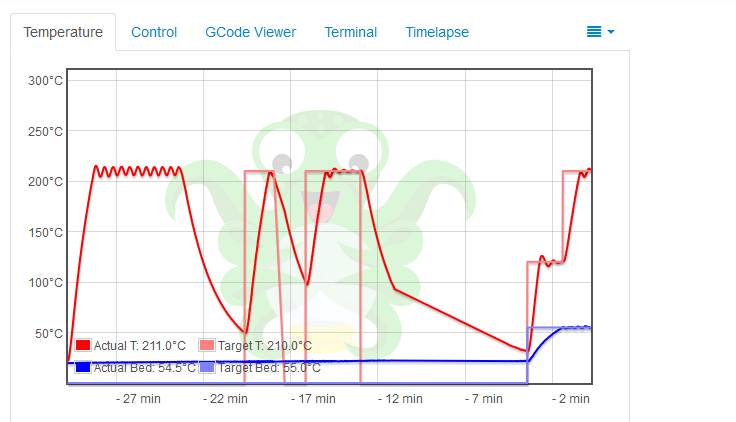 The other few peaks you can see there were some test prints.

Anyway, that was about 3 hours ago.

We’ve spent three hours diagnosing why the extruder motor stopped working after it printed the brim/initial release of filament. Finally got there - the fix for Kevin was to remove the G90 code from his machine settings in the slicer. The fix for me was to remove the linear advance from the firmware and reflash, and then sort out my Z-Offset because it wasn’t quite right. I’m just about finished printing a calibration cube now.

It was good that we both experienced the same issue and could work together to try to find the fix for it - initial thoughts were obviously Argh! we’ve got a board that’s not compatible or something has blown up.

Was a strange one to diagnose and troubleshoot though because obviously the extruder works initially then when it starts to do the print ‘proper’ the gears just stop turning.

Just as well we sorted it out because I’ve got an extruder upgrade coming tomorrow that I’ll need to fit. Shouldn’t be as much of a chore as this was, and at least it’s all surface work on the machine and I don’t have to mess around with the motherboard and wires. I will need to do some work on replacing the tubing though to make sure I get that right.

I still can’t get over how quiet it is.

Well, aside from the fans. I need to sort out the fans. Stop them running quite so noisy. We’ll see. It’s already a massive leap forward. The only other sound I can hear is the filament spool moving, which is also weird. :D

As for who won the race, I was the first to print, well, the first to start a print. Then we both had the issue, and Kevin fixed his issue and started printing first.

I mean, my printer laid down the first line of filament, but Kevin was the first to get a print going properly.

We’ll call it a draw, though Kevin’s board arrived an hour earlier than mine and we both had glue to contend with on the old board/cables.

I can see this firmware flashing being a fairly regular thing, though it depends on how often the Marlin contributors put together a new release - the last proper full release was October 2020.

We are still living in strange times though.

Was a fun way to spend an evening, with further delving into c#. Which is such an odd language. # doesn’t mean single line comment as with most modern languages, it does use // though, but # is used to actually define/enable/do things, which I find relatively jarring being used to bash, python, YAML and HCL (other languages are available).

I still can’t get over how quiet this printer is.

It’s just finished. The only reason I know that is because the fans have shut down.

Apologies for the oil on my fingers, I ended up touching the rail on the printer that was covered in oil.

Cube came out pretty well - the bottom is a little messed up because I had to fiddle with the Z-Offset at the start of the print to get it perfect.

Aside from the bottom, this is probably one of the best cubes I’ve printed. 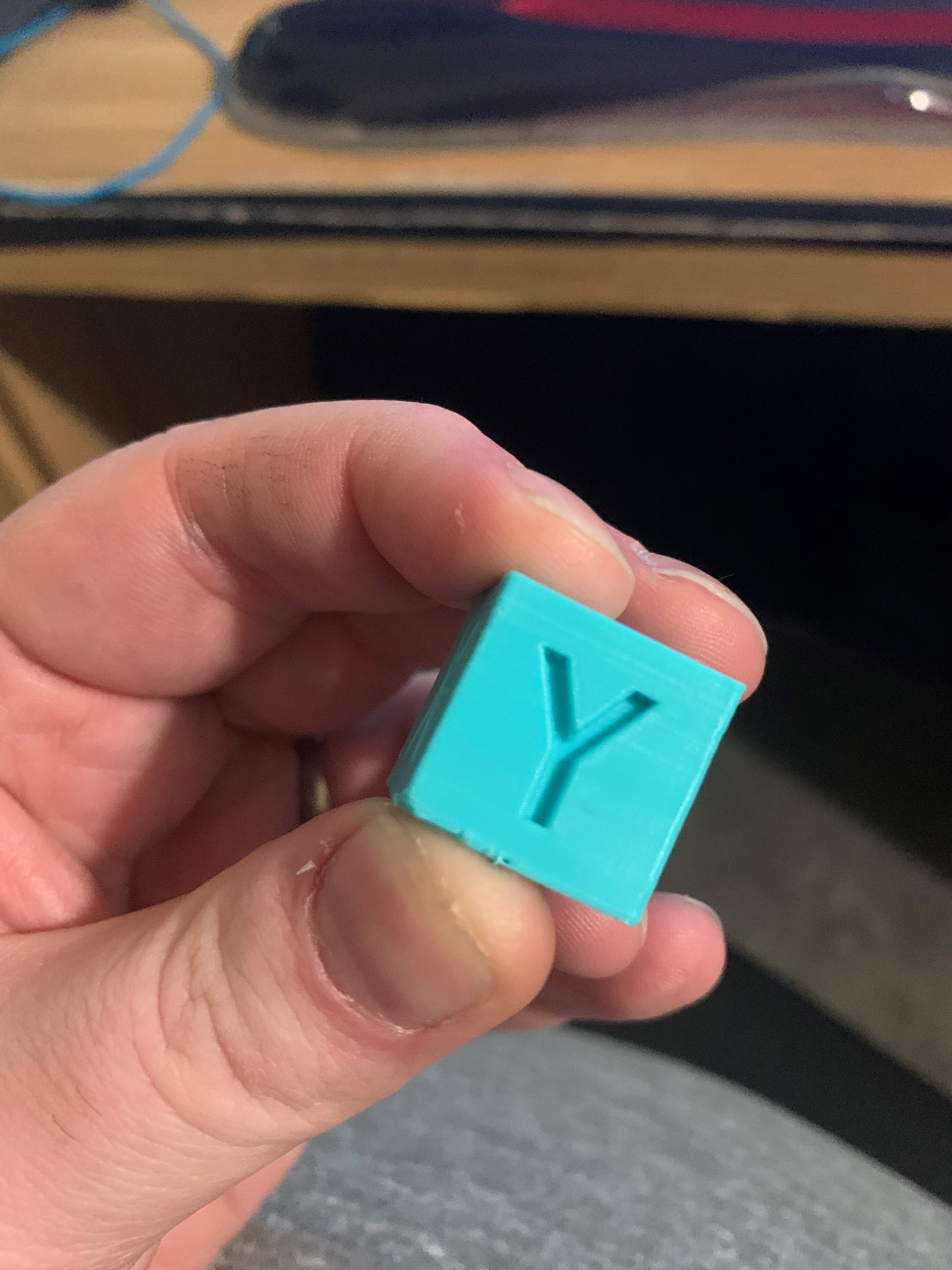